Love doesn’t always come in a minute, it takes time to find the “right one” and to build connections. A few days ago, we chanced upon a Facebook post of a Popiah seller in Penang looking for romantic partner online. Apparently, he has put up three matrimonial advertisements on his social media over the past 12 years.

50-Year-Old Popiah Seller In Penang Is Looking For A Romantic Partner Online: 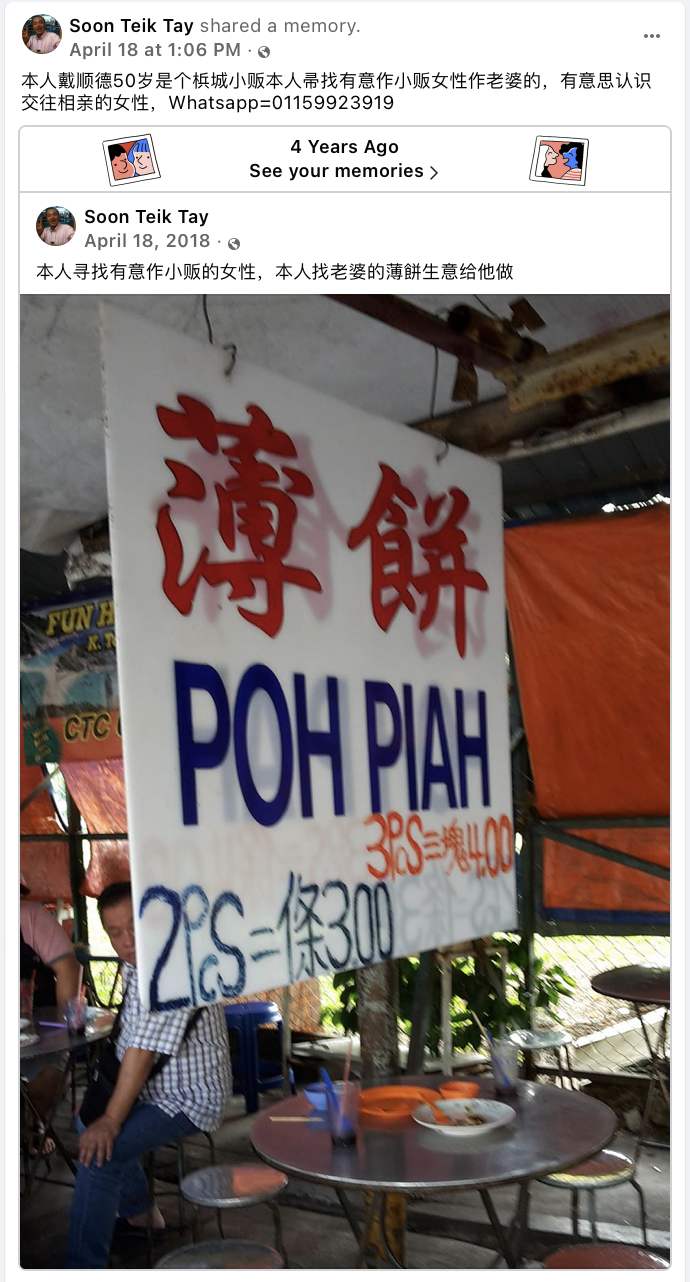 According to The Star, a few days ago, a social media post by a 50-year-old Popiah seller in Penang looking for love has caught the attention of netizens. Tay Soon Teik, who sells popiah at Padang Brown, Datuk Keramat has never been in a relationship because he was too busy building his career back then. Now that he’s finally sound, he’s hoping to find the “right one,” and said that his wife will never have to go through any hardships.

This isn’t the first time Tay puts himself out there online. For the past 12 years, he has put up three matrimonial advertisements on his social media. In fact, he had gone on blind dates and even went through matchmaking agencies in the last 20 years, but they didn’t end up bearing any fruits.

He added this might be due to the fact that people think being a hawker is an informal job. Not to mention Tay comes from a single-parent family, where some may not think he’s a good candidate.

Financially Stable With Properties Worth More Than A Million Ringgit:

However, Tay said that he’s financially sound and claimed that he has assets worth more than a million ringgit.

“I have several properties, including landed terrace houses and flats. I also have savings in my bank account,” he said.

Tay who’s been a hawker for 30 years, added that he has kept his Popiah price at RM3 for two rolls for the past 9 years. That’s because he has no issues on his finances.

“I hope to find a wife, and I also hope for someone to one day inherit my popiah stall,” he said.

As for his future wife, he mentioned that he’s looking for local Chinese, preferably single, and aged between 35 to 40s. Currently living with his 74-year-old mother, he also has two sisters. If he doesn’t find a wife in the next two years, he’s ready to retire and let his sisters and their children inherit his assets.

We hope Uncle Tay finds “the one” soon! Any single ladies who’re interested may contact him at 011-59923919 via Whatsapp or visit him at his Popiah stall where he operates from 9 a.m till 4 p.m., closes on Monday.