The word Thaipusam is derived from the word ‘thai’ meaning tenth and ‘pusam’ meaning ‘when the moon is at its brightest’.Considered as one of the most extreme examples of religious zeal in the world, Its that time of the year to witness devotees, in the name and love for god pierce their faces and drag sled attached to their body with hooks while gods are washed with the purest of milk, thoughts and decked with gold above fine golds.

Celebrated by Hindu Tamils to honor Lord Murugan/Muruga — the Hindu god of war and a son of Shiva, Lord Murugan is showered with gratitude and gifts of devotion for prayers answered. While participants and spectators shout “Vel! Vel! Vel! above the drumming in the procession, come around and witness the beauty of a grand festival!

6 Insights On The Thaipusam Festivals 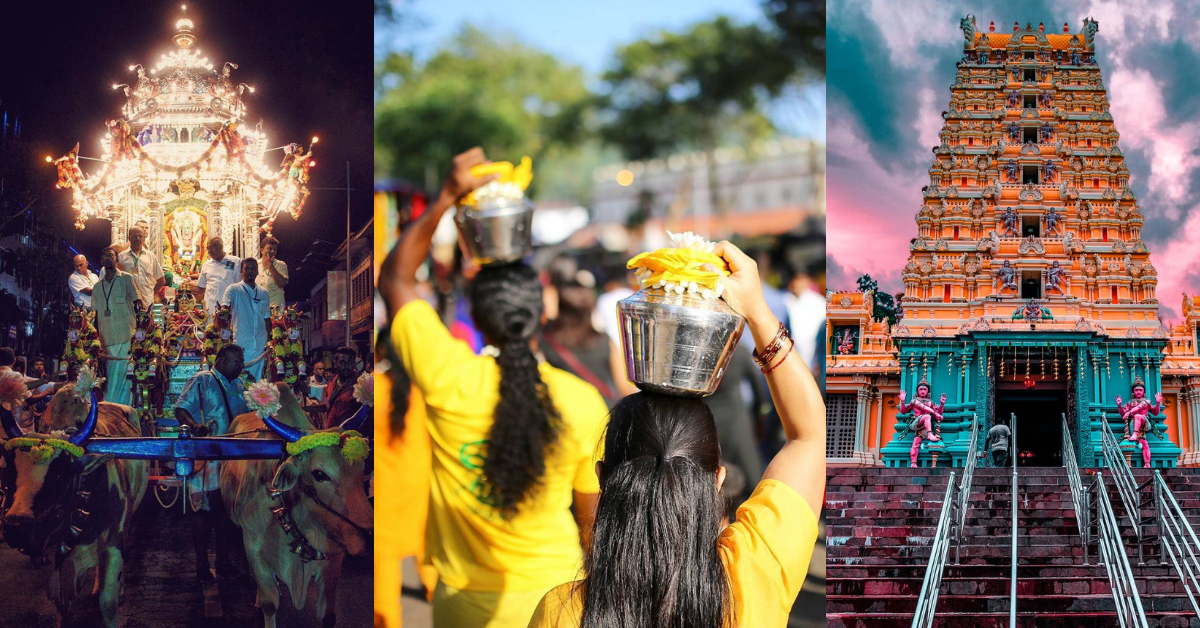 In ancient India, initially, the army was fourfold (chaturanga), consisting of infantry, cavalry, elephants, and chariots. In the Vedic period, the chariot was given prime importance as it was a symbol of strength, poise, and victory. The Mahabharata regarded the chariots as invincible instruments of battle, and the other arms were seen as insignificant.

During Thaipusam,  the chariot would bring  Lord Murugan from Kovil Veedu on Lebuh Penang to the Nattukottai Chettiar Temple on Jalan Kebun Bunga stopping to receive offerings while thousands of coconuts are broken to cool down mother earth with a belief that Lord Muruga would grace us with his presence.

Hindu festivals often feature a grand parade in which the Deity is taken through the streets. The procession attracts huge crowds, energizing devotees and bringing God’s blessings out to the city from the confines of the temple 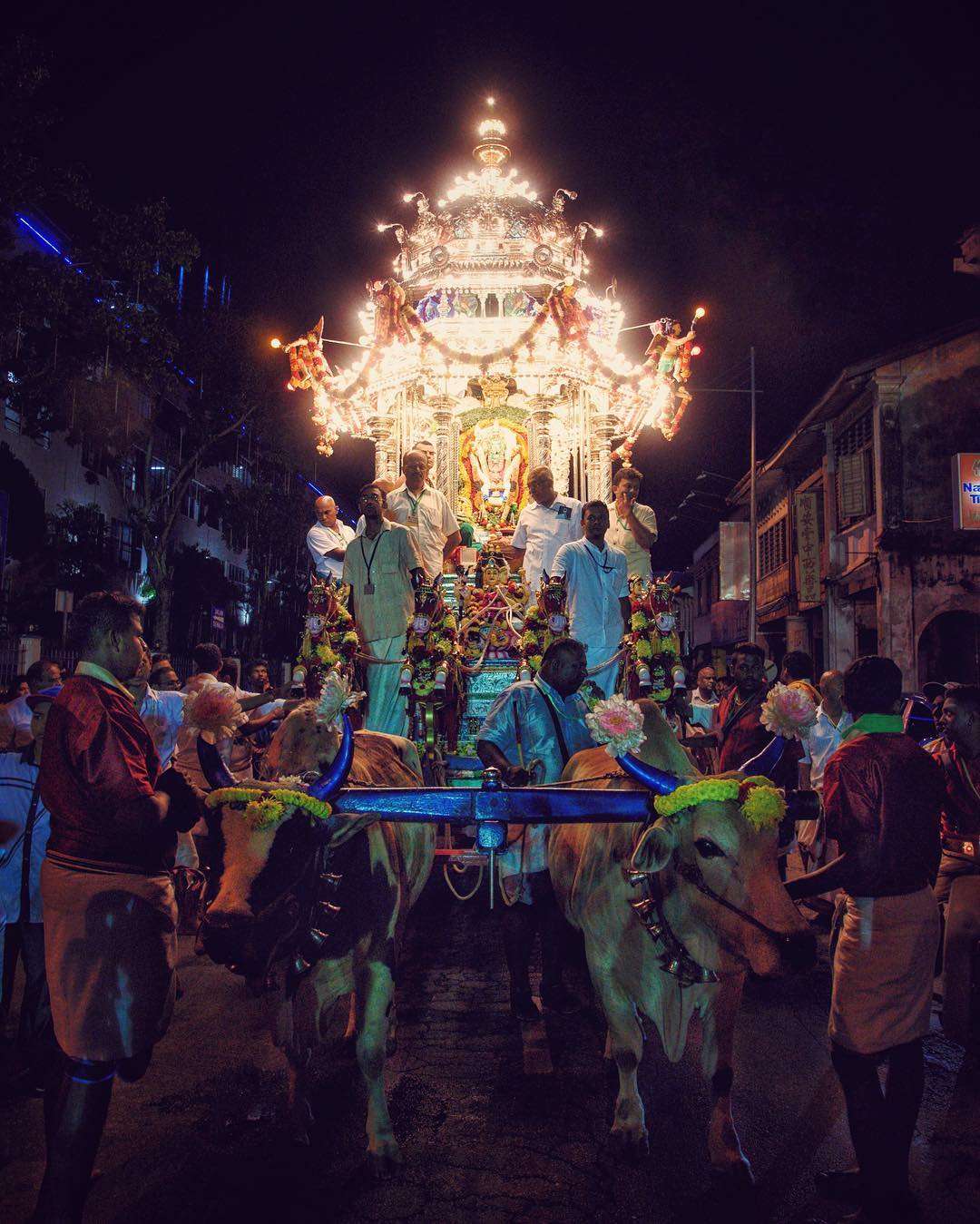 Purification of the body is the essence of this festival. This includes taking just simple vegetarian meals and observing celibacy. With over a 48 day period of rigid fasting and abstinence, Kavadis are carried by devotees to seek for forgiveness, keep a vow or offer thanks to Lord Subramaniam for showering his blessings upon them.

The carrying of kavadi originates from  where the kavadi represents a mountain with Lord Subramaniam at its apex and anyone who comes to the hills to worship Sri Muruga with an object similar to the two hillocks suspended by a load-bearing pole, may be granted his heart’s desire alongside devotees who bring sandal,milk,flowers and etc!

A basic kavadi consists of a short wooden pole surmounted by a wooden arch, decorated with peacock feathers (symbolic of Murugan, as the peacock, is his mascot), margosa leaves and other materials. Often, sharp skewers are pierced through the tongues, cheeks, and bodies of kavadi-bearers as a practice of self-mortification. Outstandingly, there’s rarely blood coming out of the wounds and hot ash is thrown to the skin and it is said to prevent the hooks from leaving a scar.Women, on the other hand, carry vessels with offerings that include fruits, flowers and lots of milk.

The practice of carrying out a ‘Vel’, also known as ‘Shakti Vel’, on Thaipusam day signifies that ‘Goddess Parvathi’ (Amman), consort of ‘Lord Shiva” gave this weapon to Lord ‘Subramanian’ to defeat the Asuras (Demons). Hence when they chant in unison ‘Vel,Vel, Vetri Vel’, the devotees receive a sense of defeat as they fight their body till the end of journey till they reach the Penang Hill Top at last surrendering to Lord Muruga and thanking him for his doings.

With the drums beating and the crowd chanting to support the long journey of hundreds of pilgrims to the Waterfall temple, the festival begins off with a pilgrimage procession that will lead the Lord Murugan on a silver chariot from Kovil Veedu to Arulmigu Balathandayuthapani temple (Waterfall Temple Penang), two bulls will pull the chariot as coconuts are smashed as a symbol of cleansing and to cool mother earth as Lord Muruga graces his presences auspiciously offering blessings as devotees offer ingredients of purity in return (milk, flowers, saree, gold) to thank the lord for his doings.

Some devotees shave their head as an act of plea to have their prayers granted while some couple carries their baby girl on a yellow hammock suspended from three stalks of sugarcane tied together from the foothill to the very top of the temple as they fulfill their vow for granting them a healthy baby.

What is a festival if there isn’t some bling bling and colors? Catch a glimpse of thousands of seekers and spectators wear their culture on their sleeves decked with jewelry and ornaments and as for participants, clothed in Lord Murugan’s yellow and orange colors, drape themselves with green neem leaves over their outfits or on their paal kodam. Neem leaves are sacred in Hinduism as they represent the Goddess Parashakti, Mother of the universe.

According to the literature, Lord Muruga is the god of the mountainous region hence why he’s always located at the top of the mountain. It is also assumed that in olden days, Hindu Gods and Goddesses went to the mountains to meditate, to introspect, to attain ascetic powers and to engage in rigorously disciplined self-mortification.

Mountainous areas were usually peaceful and conducive for such noble activities without any worldly disturbances. Take this auspicious festival to turn your mind away from the distractions of the outer world, and focus it on discovering the profound truths of the inner world.

By many names, we have known Him. He is Murugan, the beautiful one. He is Dandapani, the God of yoga who guides us on the path to Self Realization. He is Kumara, the God of child-like love, holding steady the higher realms of creation. He is Karttikeya, the God of war, who arrives to end all conflicts with piercing wisdom and swift action.

Thai Pusam is a time of great fasting and intense penance. It is more about food for the soul, rather than food for the body. With over a million spectators paying Thaipusam a visit, how will one endure the hear if it weren’t for occasional syrup and orange juice along the way.

Come over and take this opportunity to dig into literally the best vegetarian meals Penang can offer ranging from briyani to purely vegetarian banana leaf and get a taste of authentic festival feast while Bare feet hit the pavement painted with kolam, flower-like symbols aiming to welcome people and bring prosperity, to the deafening tune of Indian dance music.

Above all, the beauty of Thaipusam is to witness people from different cultural background putting aside their race and coming forward in only love for god, in unison to celebrate shows truly the essence of our country. So if you’re wondering if this might be the year to catch a glimpse of this extravagant festival, dress proper, pack light and come around to see the unseen! Happy Thaipusam Everybody!